Fixed a small bug in PNGoGUI that caused reported before and after size to be the same.
New version is 1.2.0.0.

I have released a new plug-in for QMP, called QMP Export. Have look in the qMp section.

PNGoGUI version 1.1 has been released. Quite a few improvements and it will probably be the last update in a while...

First version of PNGoGUI has been released. Find it in the new PNGoGUI section.

PNGoGUI is an easy to use GUI for the excellent PNG optimizer PNGOUT. The goal is to provide an user interface that is easy and fast to use, while still providing all the options of the command line tool.

If you post PNG images on the Internet in your sparetime or you are a professional web developer and you don't know PNGOUT, make sure to check it out! It's not uncommon to see a 30-40% reduction in size when running PNGOUT on your standard MS Paint saved PNG images. Without loss of quality of cause. 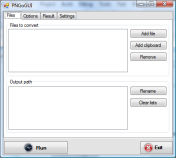 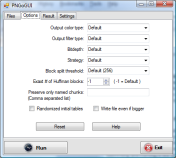